Pete and my 17th wedding anniversary is tomorrow. I have been wracking my brain trying to find something fun to do tomorrow.  I didn't want it to pass like just another day. Thankfully I belong to some of those widow support groups on Facebook and they have given me some good ideas. However, I still feel at a loss...

I find that the day before the "angelversary" of the event, is more sad than the day of. I think its the anxiety brain that is trying to prepare for it. So that when it comes, its not so much of a shock. I don't know... maybe its just me. But today has been more weepy than past years. Why this year? I ask myself, why not last year? Who knows. Either way, I feel sad, I feel empty, I feel raw.  Which makes me wonder to myself, why am I still sad? Or the better question to myself is, Why does it still hurt?  The rational side of me thinks, "well, of course you are sad."  However, I tend to have ridiculously high expectations of myself, and then feel bad when I can't accomplish them or that I "should" all over myself with things like.. "Its been 17 years already... you shouldn't be sad."  Or "Why aren't you using your gifts to talk to him?"  Yet, here I am asking the same old questions.. Why while admitting to myself that yes, it still hurts.

Today I have been wanting to find videos of him. I take that to mean that I have healed to the point of wanting to see him in action. If you have been reading the "Crazy Lady" for awhile, you know that it took me awhile to look at his picture. For example the day of his funeral, one of his co-workers gave me a picture of Pete with his team and I wouldn't even touch it. Thankfully my sister was standing right there and she took it from him. But the thought of touching it, or looking at it up close, was as if his friend had handed me a photograph that was on fire with giant flames coming off of it! No way in hell was I touching that picture!! In those moments and situations, pictures of him were such a shock to my system. I literally felt a jolt of electricity. As if I had been struck by lightening.  He was so alive and intense in those photographs, it was like his eyes bore into my soul. But, since he was not longer physically alive and standing beside me, I just couldn't look at them. It was as if any remaining pieces of my heart that were still intact, shattered.

My need today to find video of him is intense. I didn't really realize why until I was texting a friend about where the video might be. What came out in my text to her was that it wasn't enough to see his picture. I wanted to see him moving around and interacting. I wanted to see with my own eyeballs that he Lived. Not just that he died. I wanted to see those moments when he looked into my eyes and told me forever. I wanted to see myself walking towards him. To feel in my body, that this was once real. Not just a dream. Our wedding was beautiful. I had a fancy dress where I wore white cowboy boots underneath. My flowers were many shades of purples, yellows, pinks, and white.  My niece and nephew were adorable flower girl and ring bearer. A strategically placed ficus stood next to my older sister during the ceremony. She was in her first trimester of pregnancy with her first child. Luckily she made it through the ceremony without needing its services.

I take comfort that I am in a place where I want to see him living. I want to see him enjoying his life. Which I am sure he does with us. Even though sometimes, I feel being a human on earth that he is missing it. When in actuality, he has the best seat in the house. He can be with us at school, in the car, at home, while we sleep, and when we go on vacation. He watches over us in more ways out of the body than he could in the body. Doesn't mean I don't still miss him. Doesn't mean I don't still wish things could have been different.  In the big picture I see him in everything along the way. I am grateful for the way my life has turned out so far. And I am excited about my future. I guess that's part of what makes me Crazy. I'm happy, I'm sad, I'm grieving, I'm healing. I miss his face, but I am happy for him too.

Given that our wedding day was 17 years ago, the technology was that video was still on VHS. I don't have a VHS player anymore.  I don't even know if those things still work. My fear would be, that I get a VHS player and put the video in it, what happens if the machine eats it? There goes my only video of our wedding. So, I could take a risk and watch it or I just let it sit in its box in pristine condition.  But, such is life. I can't sit on the sidelines of life and expect great things. No, I have to push through. As with Grieving and with healing.

So where does that leave my day of wedding celebration?? I don't know. But, I will take the emotions as they come. Cry when I need to, laugh when I can, and smile because he lived. 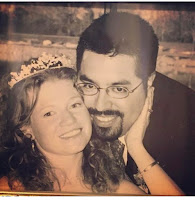