I woke up this morning after hitting my alarm a handful of times I was having a dream that I had to explain a math equation about mean, median, and mode. Which is super odd since math and I are not friends. But maybe it was my way of trying to figure out things that didn't add up.  Like the fact that I had to get my calculator out to figure out how many years Pete and I would have been married today. 19 years?! Wait? That can't be right? I decided that maybe I should go off my age instead. I was 25 when we got married and now I am 43. 18 years.... huh. I guess that makes sense then. But, 19 years! How can that be?  I thought to myself as I was making coffee, 19 years, is like what ones parents talk about being married. Not me? Really? I'm old enough to have been married 19 years?   Which brings us back to math. Even with a calculator, some things just don't compute.

After getting the kids to school, I pondered what I should do with my day. I realized a nap was what I needed first and then more coffee. After my nap, I went in search of my wedding album. Why I do this to myself? I don't know. But for whatever reason, it felt important. So, I took a picture of some pictures with my phone, put the wedding album back where it was, and proceeded to make coffee. While sitting in my chair I scrolled through those pictures from my phone. I stopped on one in particular and looked at how young I was. How young Pete was. And, I thought to myself. What would I tell her? What would I tell 25 year old me? Unfortunately, I didn't have a response.

As I went about my day, I kept coming back to this question. I even asked my networking group "What would they tell their 25 year old self, if they could?" Someone said they would tell themselves to relax. Another person said they would tell themselves that it would be ok. That when a crisis happens it would be ok in the end. Mostly people just laughed about how that was such a long time ago and we all sighed at the memory. But, I was still no closer to figuring out what I would tell her.

After multiple errands, traffic, endless red lights, and picking up the kids from school, I decided I would sit down again to ask myself again. I kept putting myself in that day and wanting to look at it with new eyes. If I could do the day again what would I say? I decided that I should have had the reception recorded. I had the wedding recorded but decided against the reception, thinking that it wasn't really worth it. While now, I wish we did. It's more footage of his life. More moments that he lived and how much fun we had. I think I also would have eaten more cake. Because lets be honest, who doesn't love good wedding cake?! I was thinking that if I had pulled aside 25 year old me and told her to hold on a little tighter, would I have listened to myself? Maybe?

However, I think anyone who goes through loss, tragedy, trauma, crisis, loses themselves in order to find themselves. Because really, why wouldn't I? Everything changed. Nothing stayed the same. Overnight I became an only parent. I was both mom and dad. I was no longer a unit. I worked and slept parenthood. I lost my identity, I lost my song, I lost my smile, I survived for my three shooting stars, since last piece of Pete lived in the three of them. I don't think that is something that 25 year old me could have even comprehended. She needed those years with Pete to pave the way for what was to come. She needed Pete's love to show her what a good marriage and what a good husband was. 25 year old me needed carefree living. Go to work, go to school. Learn to cook, learn to take care of a house. Become a mother, play with babies, lack of sleep, love her husband, plan family vacations, balance date night, I needed to live. And While a lot of that living is lost in trauma brain, I know it happened. Just like Pete. He happened. He lived. Its because of that blissful day 19 years ago today that he and I became a we.

I guess if I could tell 25 year old me anything it would be that we lived. I might tell her to laugh a little more and not take herself so seriously. And also don't be afraid of her magical gifts. I would tell her that she is strong and courageous. That big things happen in her life but she does just fine. Her children are amazing and she definitely wont be bored. I would tell her that Pete changed her life for the better, that he would always have her back, he would hold her hand when it was hard, he would give quiet encouragement, and he will without a doubt always love her. Plus, I would tell her that by the time she reaches the ripe age of 43, her magical adventure is just beginning.

Here's to you Roo Roo. Your earthly time will always feel too short but I am grateful you spent your time with me. We had a blast! Cheers! 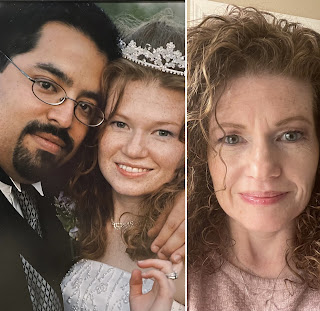